Succeeded! Your message has been sent successfully.
×

Construction company JE Dunn employed prefabrication for a recent build.
The technology is cutting edge. They needed a video to show staff what goes on behind the scenes to make it successful.

When we were contacted by Ely at the Unfound Door saying that JE Dunn needed a video to document and describe an upcoming prefab build, we were excited.  After all, just months before, we had shot another prefab apartment build in the Highlands neighborhood for local builder iUnit.

Using prefabrication for construction is relatively new, but the implications are exciting.  Not only is the build time cut down, sometimes significantly, but every piece of the build is precision engineered and inspected before it leaves the factory meaning top quality fit and construction every time. 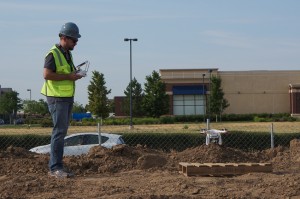 This project started off with an industry standard pre-production meeting with the client.  We discussed things like project scope, schedules, purpose, etc with all of the key decision makers.  The client decided that since the process of using prefab building materials was so new, they needed a video to describe exactly what the process was like.  After all, this was definitely not their last foray into this bourgeoning industry.

We decided on a schedule that had us on location for three separate days throughout the week to ensure we captured all the major steps along the way.  A custom time lapse rig was concepted, constructed and secured to the corner rafters.  The time-lapse would shoot continuously for 10 days and had a battery backup so it would keep shooting once the generator was powered down each night. 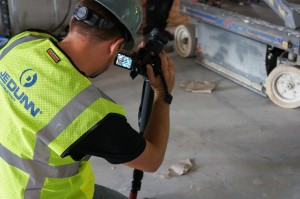 On day one we shot the large flatbed trucks coming in from the Blox factory in Bessemer, Alabama, and the workers unloading all of the tightly wrapped pieces via forklift and crane.

The weather was great, so we decided it was a fantastic time to take out the drone to get some aerial shots.  On a project of this size and scope, the drone was a great way to show just how extensive the project was, as well as to show how the build will fit in relation to the existing neighborhood.

We were back on location later in the week for day two.  All of the pieces had been delivered and unloaded and the assembly had begun.  The crews expertly rolled the racks into place and, hoisting them up with chains, maneuvered and secured them to the ceiling.  Our focus was on both the overall process of maneuvering and lifting and also the closeup details of the install and finishing.

leaders to get more information about the project and drive the narrative of the video.  We were able to setup interviews with four of the leaders in various areas of the construction site during a staff lunch break.

Day three saw us shooting the actual pods being installed.  Teams of workers rolled the pods into place, and then several guys came in to secure the attachment of the pods into the existing building infrastructure.  One final video walkthrough with a Ronin motorized camera stabilizer, and our footage was complete.

The last step to the project was to take all of the footage into the edit suite and start cutting.  A rough cut was created, music tracks were selected and approved by the client and a final meeting was 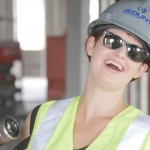 scheduled to ensure client satisfaction.  After the meeting, the clients notes were attended to as well as final finishing touches and the video was delivered.

Ultimately, the project was delivered on time, under budget and the client was more than happy with the result.  It was a fantastic experience being on a construction site and we can’t wait to go back in the future.